Microsoft seems a company that, whilst ever-present, is never quite at the forefront of computer software in the retail community’s vision. Despite powering businesses across the globe, perhaps their marketing department has failed them a little bit, and Internet Explorer costs them brownie points when compared to the likes of Google Chrome. But nevertheless, work has been underway at Microsoft headquarters to develop the next step in computer engineering, virtual reality-style programming tools. A signal of their intent is a re-write of IE to ‘Microsoft Edge’, a revamped version of Paint, and the broadly trumpeted release of Cortana to rival Siri. Above these aspects, however, excitement is building around the Microsoft HoloLens project. Here, we’ll run you through what it is, what it’s like, and what – importantly – it will do.

What is Microsoft HoloLens?

The company themselves sell HoloLens with this tagline: “Specialised components – like multiple sensors, advanced optics, and a custom holographic processing unit – enable us to go beyond the screen.” And that pretty much encapsulates what this project’s about. The tool which sits on users’ heads superimposes images over their real-world field of vision. These even move in turn with the user so, much like Pokémon earlier this year, it should all appear as part of the environment you’re in.

Test runs in the tech world reviewed is a lesser version of Minority Report-style selection and swiping, but were mutedly impressed. They tell us of users swiping fingers up and down in front of them – in mid-air. Microsoft is keen to sell this as slightly different than standard Virtual Reality, but for the regular retail consumer to embrace, they may need to sell it along these lines.

However, it really is meant for much more and has the capability to change the way computer programming is done in the future. Which leads us to… 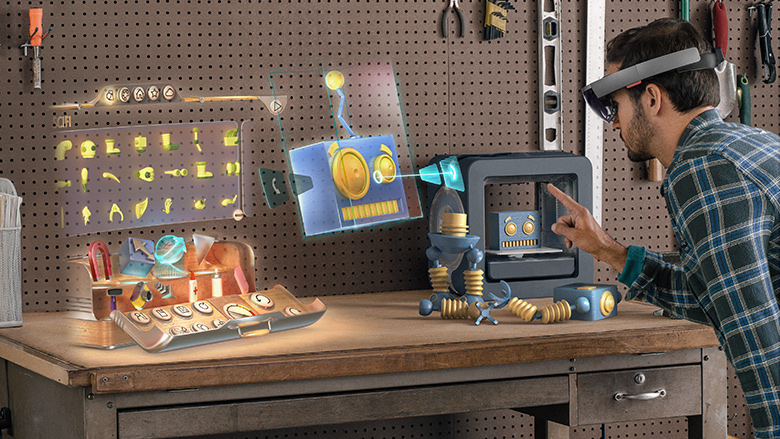 What will HoloLens do?

So if they’re keen to set it apart from standard VR, what exactly is it doing? It’s referenced as ‘Mixed Reality’, which Microsoft says blends 3D digital content from your screen into your physical world. For retail consumers, this is exciting (as with VR) from a gaming and interactive perspective, but for developers this is particularly massive.

We’ll cover availability below, but basically at the moment, HoloLens is being used by developers. The product is controlled by three primary methods: gaze, gestures and voice. One majorly exciting aspect is the collaboration point, which the company puts as follows: “When you collaborate, it’s easier to show than to tell. Your Skype contacts can overlay sketches and holograms on physical objects in your view.”

To showcase its potential, there are standing apps available for checking out. One of these which is perhaps a best pointer to the sorts of things we can expect from this product is HoloStudio. HoloStudio enables a user to “Build 3D in 3D with natural gestures and movement, creating holograms with holographic tools modelled from tools in the real world.” Mouthful? Sure, but basically it will build upon everything above, allowing the development of three-dimensional objects off-screen. How far this goes, and what we see from it, will be clearer with more use.

Some standard reviews around the web have talked about trouble with the viewing experience if a user moves too much or too quickly, and that what you see through the HoloLens can be cropped off if not managed properly. Gaze controls are apparently responsive, but gesture and voice are where issues arise. Still, from what we can see HoloLens is on the right track to change the way we move forward with VR (sorry – MR!).

When is it available?

It’s already available in the US and pre-order in the UK, for release late November, just to most of us it’s currently inaccessible. It’s got the measly price tag of between £2,700 to £4,600. But this is aimed at professional developers who, with that outlay, are expecting big things and want a jump on the competition. If you’ve got money to splurge, you can order the HoloLens directly from Microsoft. But it’s probably best to wait for the price to drop to retail level.