As per normal, we’ve put together a list of the top web design trends to look out for over the coming year. Read on to see our ‘Web Design in 2017’ guide. 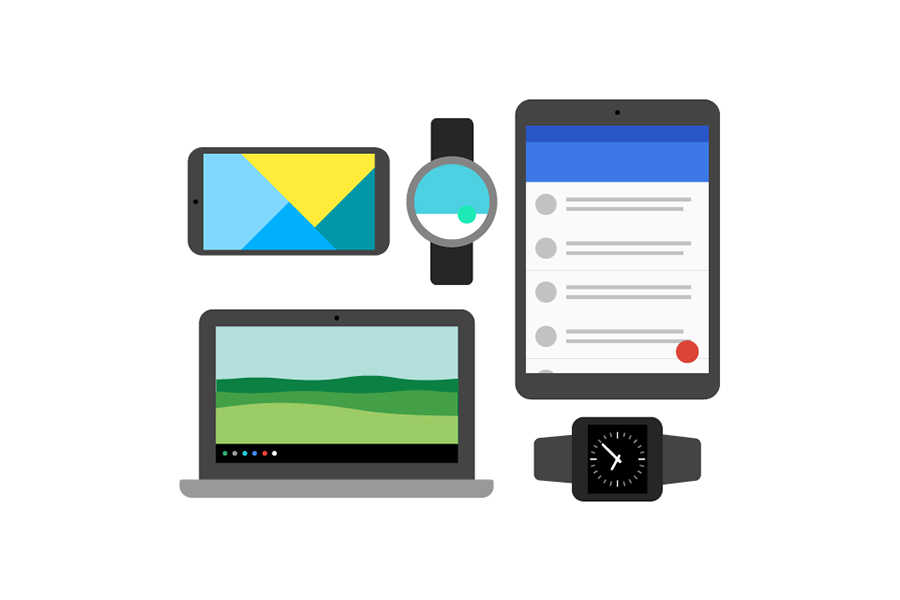 Google rarely plays no role in web design trends. This, though, is a further step into the landscape. Material is a visual language Google first announced in 2014, but 2017 looks like seeing it play a big part. Here’s how the company define the project themselves:

“Create a visual language that synthesizes classic principles of good design with the innovation and possibility of technology and science… Develop a single underlying system that allows for a unified experience across platforms and device sizes. Mobile precepts are fundamental, but touch, voice, mouse, and keyboard are all ﬁrst-class input methods.”

It’s all part of Google’s wider design vision which can be seen in their own products like Pixel and Gmail. It’s well worth staying on top of, and for a good example of it used well, check out the Fabulous app.

Okay, okay, this has been a trend for years and, since Mobilegeddon in 2016, everyone’s aware of it. But that doesn’t mean it now fades into the background. In fact, quite the opposite is true. This is now such a critical part of design that it will play a bigger part in 2017 than any year previously.

Contact forms are annoying? They’ll see new innovation next year. Menus are hard to use with your thumb on mobile? That’s about the change.

The worst thing you could do next year is sit back with your designer and think, “There’s nothing we could improve on our mobile site.”

One important aspect to look at is the Accelerated Mobile Pages project, or AMP. This is an open source collaboration that aims to make mobile browsing faster. It’s made up of three core parts, which the project managers themselves list as:

“AMP HTML is HTML with some restrictions for reliable performance and some extensions for building rich content beyond basic HTML. The AMP JS library ensures the fast rendering of AMP HTML pages. The Google AMP Cache can be used to serve cached AMP HTML pages.”

This will take a bit of time for everyone to get a hold of, but will be an important addition to your mobile web preparation.

A similar theme to look for is an increase in the uptake of Facebook’s Instant Article feature, which publishers have been slowly becoming accustomed to. The problem with this is both analytics and traffic related, but the more companies that look to this as a feature for their articles, the more Facebook is expected to iron out these flaws. In simple terms, it is a way to speed up user access to content published via the platform, by converting text from your CMS directly into Facebook’s own centralised format. Publishers are also able to theme the content with logos and optional layouts.

As technology develops, we’re seeing futuristic aspects of science apply itself to website design ideals. Virtual Reality (VR) and Immersive Video are two things we expect to play a bigger role as 2017 rolls through its months.

As part of this will be the new 360 degree trend which you’ve doubtless seen around the web and on social media. We don’t really need to say too much more about this idea when we could just give you this example: BMW 360

This may seem obvious, but one thing that needs highlighting for the New Year is image quality. This means both photo quality and image originality.

Shutterstock has been around for years now, so tried and tested photos and icons are less impressive as the years go by. Add in professional photographers sharing more and more work on social media platforms like Instagram and you have a user-base that is expecting the best.

If you have it in your budget, get a professional photographer to take brand-specific, symbolic and high-quality images that are only available for use by you. It can’t be understated what a difference this makes to consumer impression. What do you think other key web design trends for 2017 will be? Let us know by sharing this article and commenting in the post!